ARCHIVE FOR THE ‘tesla’ CATEGORY 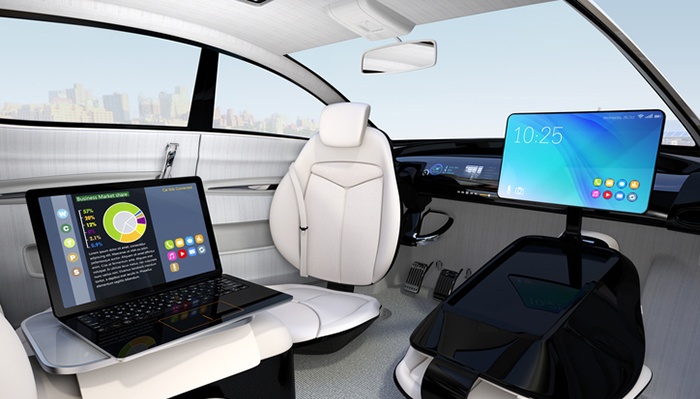 What could autonomous vehicles mean for field service delivery?

The hype around autonomous vehicles is getting ever stronger, but what role if any could they play in changing how field service delivery is managed?

“They have the potential to disrupt the traditional fleet model of assigning one vehicle to one driver, as in future they will be able to support the workload of multiple field service agents at the same time. Imagine a future, for example, where an autonomous vehicle knows the average job time of each agent, and is therefore able to schedule drop offs and pick-ups to complement their work.”

“By performing the same role for several field agents in a specific area, this could create significant productivity savings across a fleet, particularly in relation to fuel efficiency and workload management, through a reduction in unnecessary time spent on the road or idling.”

David Rodriguez, Chief Marketing Officer for GreenRoad also agree that productivity could be significantly increased if we were to see autonomous fleets emerge.

“First, they’ll enable field service technicians to recapture productive hours during the day. Rather than focusing on driving, workers will be able to concentrate on customer service, reporting, and other elements of their job while on the road.”

“Autonomous vehicles will also enable companies whose field tasks don’t require specialised equipment to move to a model in which the company owns fewer vehicles (or simply contracts with a car-sharing provider), and employees are picked up and dropped off at their worksite, freeing up the vehicle for the next employee. Most importantly, autonomous vehicles will improve safety.”

“Today, according to the NHTSA 1 in 5 fleet vehicles are involved in accidents each year. Eliminating human error from the driving experience will lead to lower accident rates, repair costs and absenteeism, and overall cost reductions ranging from $16,000 - $500,000.”

1 in 5 fleet vehicles are involved in accidents each year. Eliminating human error from the driving experience will lead to lower accident rates, repair costs and absenteeism, and overall cost reductions ranging from $16,000 - $500,000.

“We are still some time away from autonomous vehicles becoming commonplace in field service delivery,” says Miller

“The means testing programmes being carried out by their developers still have many years to run – and even then, these programmes haven’t focused on the vehicles’ suitability for field service delivery models. As a result, they are still relatively unproven in the professional space, so until they become the norm, telematics provides the best technology solution for safer, more responsible driving. Many of the benefits ascribed to driverless vehicles – such as increased fuel efficiency, improved safety and greater productivity - are actually already possible by leveraging telematics software against a fleet, so in many ways, the benefits of driverless vehicles are already available.”

Rodriguez however, thinks the future may not be quite so far away.

“The Society of Automotive Engineers is classifying self-driving technology in 6 categories, ranging from no automation (Level 0) to full automation (Level 5). Some manufacturers hope to achieve Level 4 autonomy in the coming years, with Tesla promising “full self-driving capabilities” (presumably Level 3 or 4) this year and Ford setting a date of 2021 to achieve Level 4 autonomy.”

“Level 5 vehicles that require no human intervention under any circumstances (extreme weather conditions, uncharted roads, etc.) may still be decades away. But even with level 4 technology, we can expect to see a shift in the preferences of field service companies, as fleets stand to gain a great deal of benefit from the safety, efficiency and operational improvements autonomous vehicles offer.”

“Amazon, Fed Ex and others are already testing out automated deliveries. It’s not unreasonable to think we could see fully autonomous fleets (with human workers on board when extreme conditions are expected) within the next 4-5 years.

Of course the biggest area of concern is the safety aspect. There are always going to be concerns around the safety of autonomous vehicles until they become the norm. But are such fears founded? Is there a danger that the technology could be held back by red tape and regulation or is it necessary to ensure any such transformative technology is highly regulated from day one?

“Autonomous vehicle fears are mostly unfounded for a simple reason – multiple studies have shown that human error is the cause of 90 percent of vehicle accidents", explains Rodriguez.

“While technology is certainly prone to human error in the development stage (bugs and programming gaps), automakers are taking the responsibility for releasing well-vetted autonomous technology very seriously, understanding that early mistakes could set autonomous adoption back by years."

Many of the fears you hear discussed, such as the fear that the vehicle will sacrifice its passenger if it means avoiding a collision with a school bus, rely on scenarios that will become virtually non-existent once self-driving cars are widely adopted.

"When they’re ready, autonomous vehicles will be like professional drivers with extra-sensory perception and zero risk of developing highway hypnosis or road rage. Not only will they consistently execute proper technique when climbing a hill, taking a blind corner, driving on wet roads, etc., they will also have advanced sensors and access to moment-by-moment road condition data. So many of the fears you hear discussed, such as the fear that the vehicle will sacrifice its passenger if it means avoiding a collision with a school bus, rely on scenarios that will become virtually non-existent once self-driving cars are widely adopted.”

“Just as automakers are highly motivated to ensure their vehicles are safe, they’re motivated to work with lawmakers to ensure the needed regulation is in place before their technology is ready for mass adoption. They may not be organised in their efforts yet but a more cohesive approach will no doubt come soon, considering the opportunities ahead. It’s important that reasonable regulation be developed as well as incorporating the extensive amounts of existing professional driver behaviour data that supports comprehensive testing if autonomous vehicles are going to be safe and successful.”