ARCHIVE FOR THE ‘derek-goldsmith’ CATEGORY 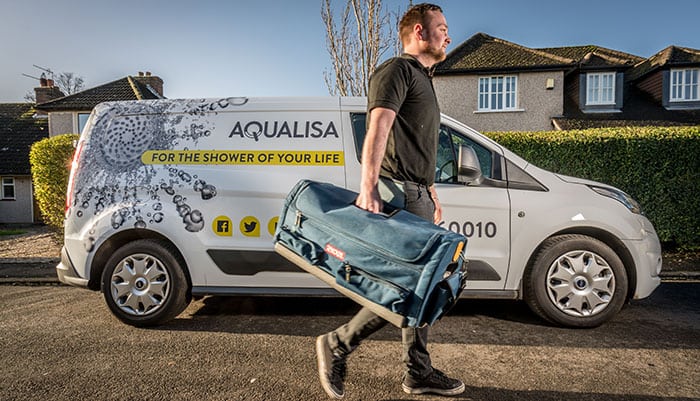 Aqualisa was the brainchild of founder Derek Goldsmith, an engineer who bound together two dissimilar metals to create the Bi-Metallic Coil in 1976, making cold showers a thing of the past. In the 00s, Aqualisa introduced the digital shower, which provides consistent, no-fluctuation water temperature at the touch of a button. Over the years, Aqualisa’s smart showers have become ever more sophisticated, particularly with the recent introduction of the QTM, which has personalised functions promising the perfect shower.

Aqualisa employs a network of field engineers to service and maintain its showers, which are supplied under warranties of up to five years. To book maintenance appointments, Aqualisa used scheduling software that did the job but was limited in scope and had received very few updates since it was implemented. Kieran McNally, field service manager for Aqualisa, explains, “We knew there were better products on the market. So as our contract with the previous provider came up for renewal, we shopped around, attended exhibitions, and invited potential vendors to present their product. FLS was one of them.”

The way the data is presented makes it easy to read, understand and manipulate, so we can see what’s happening across the whole service chain.FLS demoed its real-time scheduler and route optimiser, FLS VISITOUR, and offered an initial test: taking jobs already scheduled by the old system and seeing if FLS VISITOUR could do it better. Without changing appointments, FLS VISITOUR brought back a 9% fuel saving and showed the potential for much more if it had been used to schedule the appointments in the first place.

“The fuel saving was significant, and was one of the reasons why we chose the system” says Kieran. “There were other factors too. FLS VISITOUR has a number of cost- and time-saving functions the old system didn’t. For example, if an engineer phones in sick, the system will automatically reassign their jobs or propose the most economical engineer if overtime is required. The on-screen graphics are well laid out too. The way the data is presented makes it easy to read, understand and manipulate, so we can see what’s happening across the whole service chain.”

Aqualisa proceeded with a ‘try before you buy’ trial, which FLS offers all new customers. This involved a light integration with Aqualisa’s service management system, Tesseract, and live operation for eight engineers. “The results of the trial were really positive,” says Kieran. “Mileage costs were reduced and we saw an increase in the average number of jobs per day. We quickly learnt how to use the system and received a very good, very accommodating service from FLS.”

With the business case for using the software proven, FLS VISITOUR will be deployed company-wide this month. For Kieran the outlook is positive. “It’s a huge improvement on the system we had before and makes us far more efficient than we were. What’s more, FLS is constantly refining it, making it better for customers, so that we can provide a better service to ours.”